From comments it seems that many readers would appreciate learning about exercises aimed at improving their art.  It is one thing to read about it or look at it, but that is very different from doing it.  I think I will make some posts on Rx Remedies spaced out between the regular posts.  Please feel free to comment comment on this proposal.  This is part of the purpose of this blog. 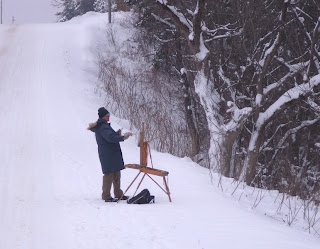 Gray and Simplified
The subject areas come from my experiences and observations in my classes and painting sessions of my own and with others.  These Rx Remedies will include exercises aimed at enhancing the core building blocks such as shapes, values, colour, paint quality, and edges.  In turn the exercises will also help with subject matter choice and design, and the elevation of the design to an art form.  The exercises can be thought of as workshops.  Everyone knows that a workshop (say a day) will really only give you one idea, and that the idea will only become yours after you leave the workshop and give it practice.  Your paintings will improve as you practice a set of the ideas in such a way as to be able to connect them together.  There are no short cuts to this, practice, practice, practice.  That is the secret.  The Rx Remedies will be spaced out enough to allow for practice.  Those looking for instant gratification will probably not participate, preferring facebook instead. 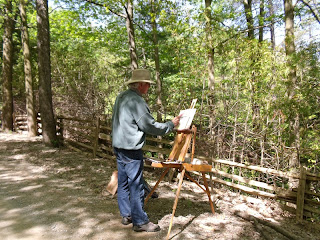 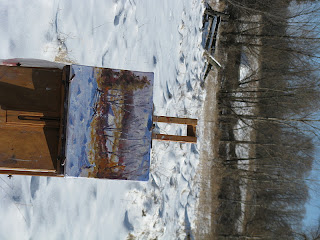 Bright Day Winter Study
I think Harold was right.  For a representational painter, landscapes outside, still life, figurative, imagination, inside.  Portraiture from life, inside or outside.
Posted by George Perdue at 12:26 PM 1 comment:

I'm not referring to the financial robber baron forecasts, just the local weather.  Both are quite often wrong.  OK, most often.  The temperature has been unusually warm, so despite the foreboding forecast we headed up to the Hockley Valley.  Sunny and warm they promised.  "Trust me."  Driving north I watched the dawn and saw nothing resembling the sun.  Zero degrees said my car.  I know I won't get cancelled,  we are down to the hardies now.
Wandering the Hockley, hoping that the sun was just a little late, we stumbled on the site of "St. Paddy's Surprise.  It was created on March 17, 6 or 7 years ago.  There had been a snow storm.  Well, this time it was the first ice rink of the season.  Careful. 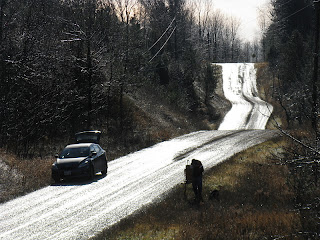 Faceoff, Oil Painter Style
Some interesting possibilites.  Tonalism, perspective in several varieties, flattening, high eye level.  So why not try a panel sealed but not gessoed and oil primed?
That panel just sucked up the paint like a blotter.  Had to use a load of mineral spirits and paint just to get the shapes and values down.  Then I looked up....... 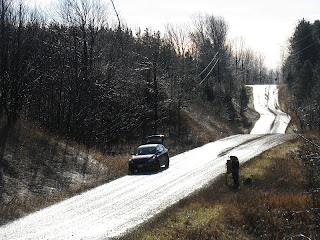 Ice Under the Sun
Out he came just as the setup was finished and the notan and first layer was complete.  Now, the sun was low, so the sunless and sunny versions had a number of similarities.  I chose the in between version.  That required some memory and experience.  Make it a bit moody I thought.  Capture the ice.  Plaster the paint on the blotter. 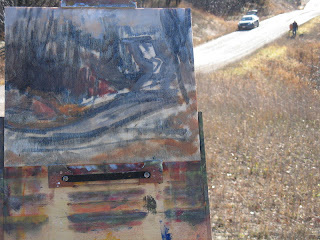 Shapes, Values, Colours Indicated
The blotter slowed the progress.  Had to dump a pile of paint on there.  Ice in full retreat. 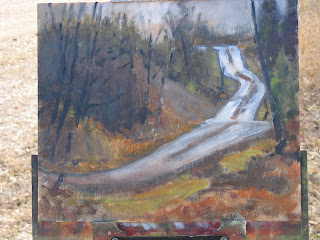 Blotter Finally Covered
Now the temperature went up in the direct sun, but the wind came up and the air temperature was stuck at zero C.  All I could think about was "this is going to disappear in the blotter over night.  We departed for a coffee and a bite to eat.
The next morning I found the painting still thirsty for paint.  So, I sealed it again.  This time I used alkyd gel, lots of it.  Today I pulled it out dry and began to paint.  It was like painting on a thin underpainting with traces of colour.  It was dark.  I tried to keep some of the passages since they seemed interesting.  Built up the paint everywhere else.  It will get the finishing touches in the next couple of days.
Posted by George Perdue at 1:55 PM 1 comment:

Oil, Thick, Thin and In Between

Lately I have been observing people in a class painting en plein air with oil paint.  Some people have been painting for a considerable time, some not so much.  Aside from the fundamentals, many are experiencing difficulty on their palette.  The problem is controlling the amount of paint on their brush.  This results in too much paint too soon in the process, or a gooey mess.  Some people can work with these conditions, some can't. 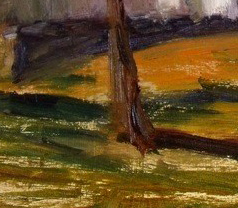 Thick and Skipping
Well, this person was not trying to get broken colour.  The paint was too thick to manipulate or move around.  Dry brush when something else was intended.
The cause - on the palette the painter could not manage to take a sensitive bite of paint from the squeezed out piles to match the medium in the brush.  Too much paint, inability to mix the the required tone.  Then the squeezed out paint ran out.  Interruption and more squeezing out.  The other extreme for this person was a load of mineral spirits and a bit of paint for preliminary underpainting, followed by more of each.  Both practices progressed to end with too much thin paint that was too wet to work with. 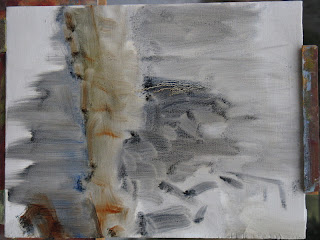 A Start With Thin Paint

Here is a start with lots of mineral spirits in the grey paint.  Now, if you can just continue with ever more paint in a slow progression.....


Of course, there are no rules for this.  Lots of practice will usually straighten out the problem and result in coping mechanisms that allow for occasional overdoses to be dealt with.  You can work with mineral spirits, or paint from the tube, or paint treated with a medium, etc.
Keys for success;
Keys for Recovery from an overdose;
In less detail this means practice, practice, practice.  Or, "go to your room" and paint as Robert Genn says.
Posted by George Perdue at 9:08 AM No comments:

Email ThisBlogThis!Share to TwitterShare to FacebookShare to Pinterest
Labels: Painting

Recently I have found a second white appearing on my palette.  Most of the time I use Titanium White.  In the last couple of years I have explored a number of Titanium Whites.  I like Gamblin, Rembrandt, and of course Old Holland.  For value I have used a lot of LeFranc.  During this exploration I also delved into Lead White.  I really like it, but I find I don't prefer it in all applications.  It is fantastic in places I want a warm white, in impasto, and in places where I want an unpredictable outcome.  It tends to come off the brush stringy and wobley.  If I whip it, it gets more viscous and ropey.  Great under the palette knife. 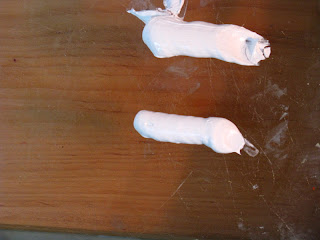 Titanium Above, Lead Below
OK, it is only a picture, so difficult for you to see the hue difference. 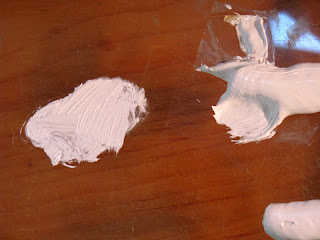 Titanium Under The Brush
Then, carefully trying to do the same with the lead white; 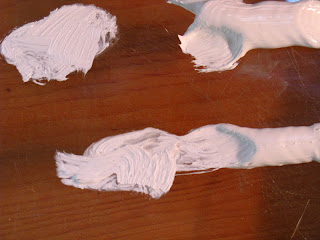 Juicy, Gooey, Lead White
I used LeFranc Titanium White and RGH Lead White.  If you want to buy RGH, call them first and order over the phone.  Old Holland's Lead is fantastic but expensive.  I have been using Flake White Replacement by Gamblin.  It has maybe 80% of the properties and none of the lead.  Good news for those who like to suck their brush.  I have found RGH Extra Fine Lead White and Blue Ridge Flemish White to be interesting as well.  Both come out of the tube loose and very smooth.  Both whip into a viscous pile for less control or more impasto.  Thixotropic me thinks.  Store these tubes upside down to eliminate oil separation.
Yesterday I used Lead white and Ultramarine Blue for some sky work (Below).  Just mixing on the palette gave me a look that is out of the ordinary.  It looked translucent and warmer than the usual and the ropeyness gives almost a two tone effect if applied with that in mind.  I usually mix in another pigment but not with this.  Its not for everyone. 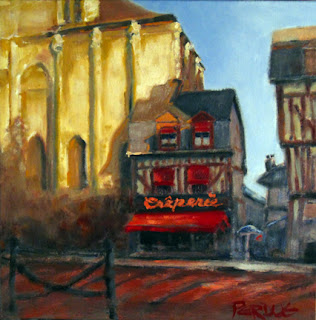 The Creperie, Pont Audemer
Posted by George Perdue at 11:49 AM 3 comments:

Email ThisBlogThis!Share to TwitterShare to FacebookShare to Pinterest
Labels: Painting

Boudin was born in Honfleur and convinced the young Monet to paint outside.  This is one pretty town.  She has been painted many times by any number of painters and a few artists.  She escaped damage in the second world war. 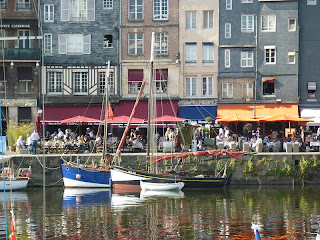 Honfleur Inner Harbour - Reflections
A few plein air artists set up daily around the harbour.  There are so many paintings there, never mind the rest of the town.  People watching at its finest. 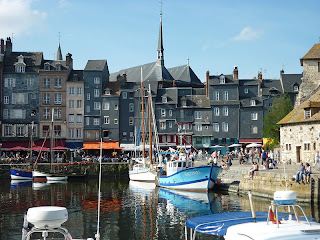 A Pretty Scene on the Harbour
So, I had to set up.  Remember I get an hour, so set up time is critical.  And the wind was gusty.  I chose a bollard to put the little box on.  Just got into the painting and a gust........ 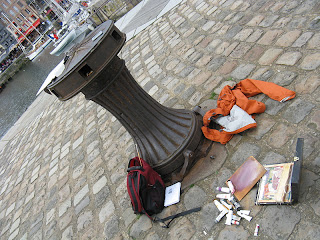 Blown Down in Honfleur
By this time I was thinking about modifications to the little box.  It wasn't to blame, but a more substantial easel would be welcome except for the weight.  One tube of paint was punctured, bummer.  I did get a sketch with indications of all the architectural detail at least suggested.  I personally don't care for all that clutter, but I find it difficult to get past it quickly, on site, and wanting a memory.  To help with that, I use big brushes, a short palette, and a value shape plan from a small thumbnail sketch.  This quickens the pace by getting big coverage with each stroke of the big brush, placing the stroke and leaving it alone until treating the edges, and by decreasing the decision time given the few colours to choose from.  For the short palette to be an assist, one has to be able to quickly mix the tones required.  I practice this in all my plein air work unless I am on a different mission.
Posted by George Perdue at 12:20 PM 1 comment:

How Many Cobbs on a Stalk of Corn

Lets see the farmer in you.  My friend Irish Joe Cleary introduced me to the corn fields years ago while training for a marathon.  So, how many cobbs on a stalk of corn?  On the corn syrup can there is three.  My mother in law, a farmer, says there is way more than three. 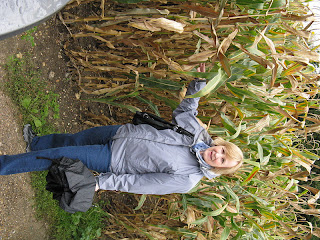 An Artist Observes
If you paint you must be a good observer, right?  You learn to "see", right.  Well, there is ONE cobb of corn on a stalk.  Yup, one!  Seems like a huge plant for a one tiny cobb.  Well, for 15 years it had always been one cobb on my trips into the cornfield.  But alas, we found a variety with two on at least a significant proportion of the stalks.  We had to come all the way to Giverny to discover this trinket, and no, they have not been pruned back.  What's next?
Posted by George Perdue at 10:59 AM 3 comments:

George Perdue
A Canadian Oil painter from Glen Williams Ontario, George paints from life in order to train the eye to see how nature works its magic. This ever evolving knowledge leads to a knowledge of colour and shape that cannot be garnered in the studio. Armed with these lessons he experiments in the studio using paintings done en plein air as reference. The varying degrees of abstraction then take on a nature based identity. He teaches "Painting", "Plein air Painting", and "Colour and Light" and students also seek him out to lead painting excursions to all parts.